I went out this morning to sort and band the chickens when I nearly stepped on this little pullet.  It was pretty obvious from the blood where her tail-feathers used to be that she wasn’t in great shape, and more worrisome was the fact that she didn’t move when I approached. 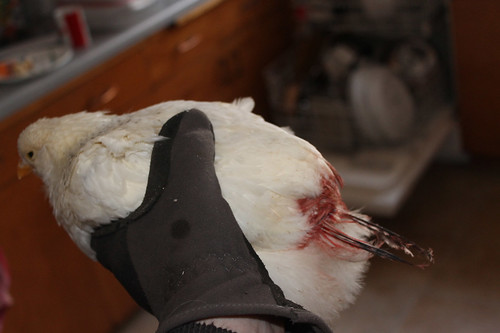 I was worried for a moment that some kind of predator had gotten in the chickens room, but quickly noticed that the little pullet wasn’t moving for a good reason. 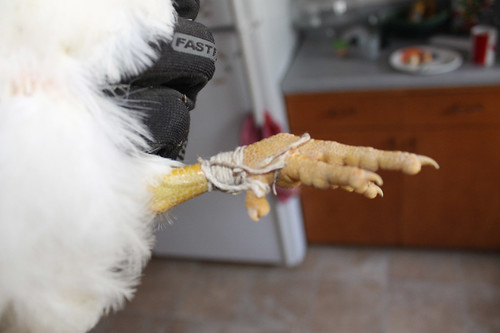 She was a bit tied up, a feed bag string had wrapped around her leg and then got caught on a post.
I was immediately pretty ticked off at myself for carelessly leaving the string from a feed bag laying on the ground where one of the chickens could get into it.  I think that the tail feathers were picked out by the other chickens while she was immobilized (likely the big white rock cockerels). I took her to the house and cut off the string, and her feathers should grow back in time, so no permanent harm done.

It was only after I put her back in with the rest of the chickens that I noticed the problem that makes her the first cull chicken of the group: she has one spraddle leg.

Spraddle leg has a few causes: abnormal incubation (too hot, too humid, >21 day incubation), Slippery flooring during the first few days of life (newspaper or cardboard bedding), or just plain old bad genetics. It can look a bit like Mareks disease, but Mareks causes paralysis of a limb, and the pullet is moving the limb just fine, it’s just twisted at a strange angle beneath her.

Seeing as how these chickens are the breeding stock that will go on to form the genetic foundation for our farms chickens (broilers and layers) for the next 6 years or so, I can’t risk a pullet with a spraddle leg.  The roosters are even more important, since they will contribute an even greater percentage of their genetic material.  That’s why I have twice as many roosters as I need.  Only the best looking 2-3 roosters will make the cut.

To make things easier on myself in the coming years, I’m putting leg bands on all the chickens.  2012 Pullets get a blue band on their right leg, 2012 Roosters get a red band.  3 years from now, when it’s time to replace the breeding stock, I’ll have a sure-fire way to quickly distinguish between the new stock to keep, and the old stock to cull. 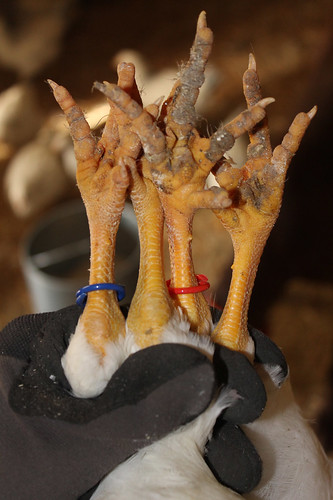 So far, I’m liking the looks of the chickens.  Most of the Delaware pullets look good, except for ol’ spraddle leg. I appear to have one Delaware rooster.  Sexing day-old chicks isn’t foolproof, so one or two is bound to get through.  The Delaware pullets are averaging 1lb 10oz right now, with the one rooster tipping the scales at 2lb 2oz.  These are most assuredly a heavy breed.

The Rhode Island Red roosters are all looking fine, they’re slower to feather than the rest, so they still look a little ugly. True to type, they are all pretty feisty little dudes. The RIR cockerels are weighing in the same as the Delaware pullets: 1lb 10oz.

The White Rock Roosters are pretty impressive thus far, they’re just about to make it to the 2lb mark (1lb 15oz) at 7 weeks.  Not bad.  The Rock x Delaware is looking like it might actually work.  Although, for reference, a “NASCAR” Cornish x Rock broiler would be butchered at 6-7 weeks at a live weight of 5-6lbs.