We finally got all the broilers slaughtered, processed and delivered.  We only a little over 50 broilers this year, and that was pushing it, since we had to pluck them all by hand.

The Commercial Cornish-Cross chicks were just 6 weeks old when they got big enough to butcher. The roosters weighed in at just over 6lbs live weight, which put them a shade over 4lbs dressed out.  We got really lucky in that we only lost one chicken to the heat. The commercial broilers are notorious for having serious problems surviving in high heat. 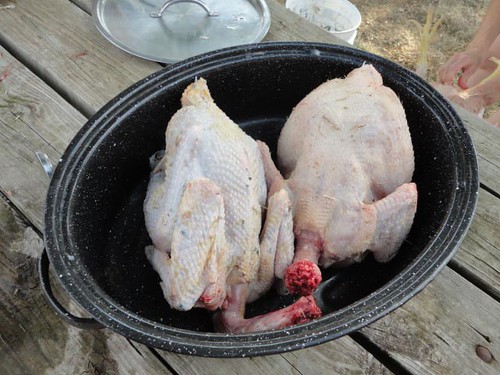 This is what they look like side by side. On the left we have the “Heritage” cornish-cross rooster (Dark Cornish x White Orpington) at 2.85lbs dressed weight. On the right is the Commercial cornish-cross weighing in at 4.45lbs.

Our largest Commercial broiler was 4.66lbs dressed, and the smallest was around 3.4lbs. They averaged about 4.1lbs. 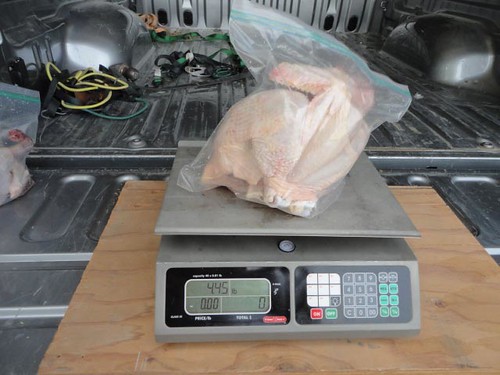 The largest Heritage broiler was 2.85lbs and the smallest was a diminutive 1.75lbs. The Heritage birds averaged about 2.0lbs. 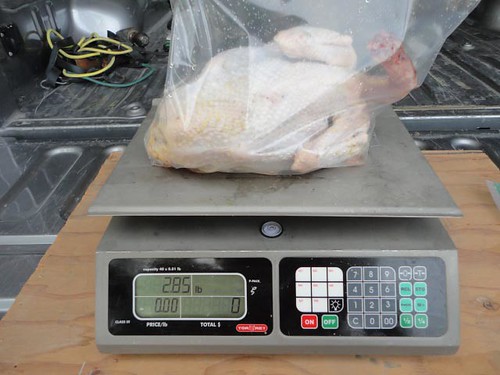 The Commercial Broilers were super easy to pluck. We were joking that they were already half-plucked because they just don’t have half the number of feathers that a normal chicken does. The white feathers (and shafts) make it even easier.

The Heritage Broilers were quite a bit more work to pluck. Their feathers were more grown in at 13 weeks old, and despite having pure white mothers, they all had very dark plumage. This meant that it took quite a bit more work to make sure that the carcasses looked clean, as most people aren’t used to seeing little flecks of pigment under the chickens skin where their feathers used to be.
Skin color varied from yellow to white, with yellow, white and green-tinted feet. All of the heritage birds (especially the pullets) had that deep-yellow fat that you hardly ever see in a Commercial Broiler.

We’ll see how they taste here in a few days. We’ll have to cook two of them up and do a side-by-side comparison.

All in all, I’d say that the first year of chicken breeding has been a learning experience. Is that euphemistic enough for ya?
We really missed the mark on growth rate and carcass weight; I was prepared for that. The plumage color was all wrong, and that’s the first thing on the list to fix, the low-hanging fruit as it were.

If we’re going to make the heritage broilers work, they have to be easier to process, and they have to grow a bit faster.

We’ll see how we do next year.

*Edit* – We’re making a few changes to our homegrown broilers for 2013.