As I mentioned when I finally finished building the Winnebeggo, the only thing left to do is a bit of real-world product testing.

We were prepared for a bit of a battle in getting all the chickens to accept the Winnebeggo as their new home.  I’d seen a video (I think?) of Joel Salatin describing a 4-day process of acclimating chickens to a mobile coop.  From what I can remember (I can’t find the video now, of course) he said to count on 1/3 to 1/4 of the hens to attempt to roost outside of the mobile coop on the first night.  In the three subsequent nights the numbers would decrease until they all learned to roost inside the mobile coop. 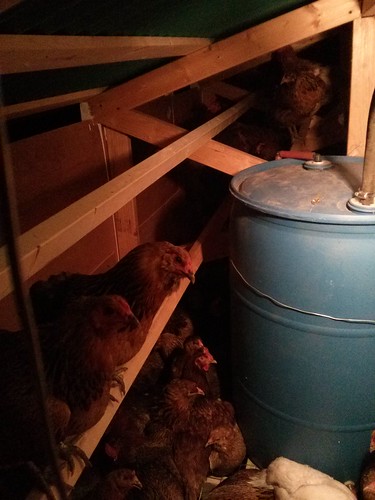 The first night was a bit traumatizing for them with the big move, most of them spent the night on the floor, not bothering to fly up to the roosts.

The next morning we moved the Winnebeggo a good 300-400 yards from the barns and let the chickens out.  They took quite a while to figure out how to exit the Winebeggo, and I suspect that half of them never made it outside the first day.

That evening we were pleasantly surprised to find only 10% of our chickens attempting to roost underneath the Winebeggo. 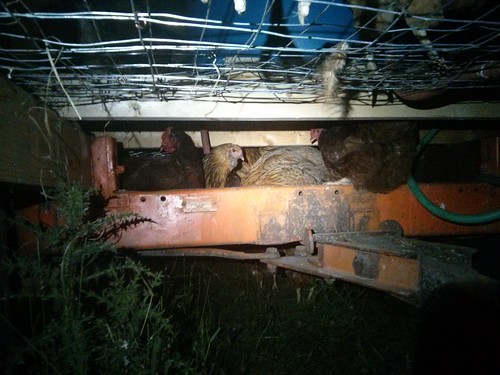 After throwing the wayward chickens back in, the whole process was repeated for a few days.

True to Salatin’s word, the number of chickens roosting outside steadily dropped until, by day 4, they were all choosing to roost inside the Winebeggo. 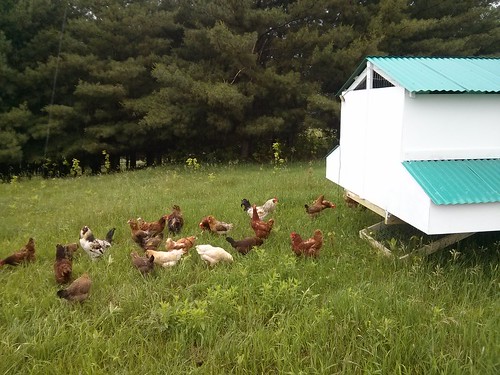 So here we are a week later and here’s what we’ve found out about the Winebeggo:

Egg production dropped a bit, we’re attributing this to the big change in their lifestyle, hoping it will pick back up.

Egg eating and egg-breakage have dropped to almost zero!  As a result, egg-cleaning takes much less time.

Feed consumption has been cut in half, particularly when the chickens are in an un-grazed paddock with plenty of seed-heads on the grasses.

Egg quality has gone up with even brighter yolks and firmer whites.

And last but not least, the chickens seem a lot happier in their new digs.