Mercifully, election day has come and gone.  No more political ads on TV, no more incessant campaign coverage on the news. And there is one more awesome thing about the end of campaign season: truckloads of free campaign signs. 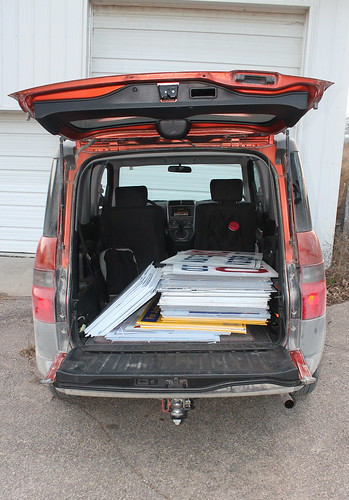 I’ve been calling tbe local campaign offices for both parties since the day after the election.  They take a few days to go collect all the signs from their supporters yards.  If the candidate won’t be running for re-election, or if the signs have the year printed on them, then the campaign has to throw the signs away.  Usually this means paying to dispose of them in the landfill or a recycling facility. When I called, they were more than happy to let me take all the signs I wanted for free. So this afternoon I headed into Rochester to pick up as many signs as they’d let me have.

As you may recall, this spring I built a prototype pastured poultry pen. The pen looked pretty nice to start with. 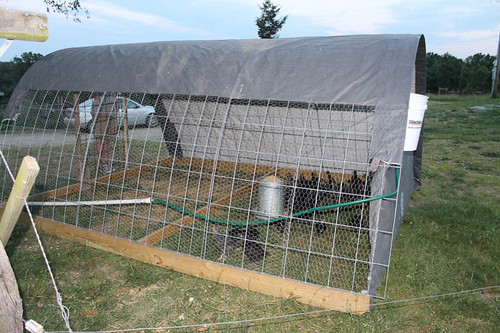 But after a month, and a few storms, it looked like it had seen better days.  The tarp that I’d used to cover the cattle-panel structure was about 3 years old and UV-damaged in a few places.  But even with a new tarp, securing it to the structure was a problem, as tarps are quite prone to ripping if you give them even a small hole to start with. 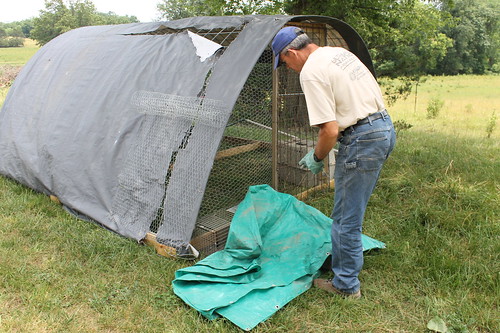 Add to that the fact that 3 cattle-panels and a suitable tarp are fairly expensive, and I was on the hunt for a better solution.  I quickly hit on the idea of using coroplast instead of a tarp to cover the structure. Coroplast is more rigid, very difficult to tear, and most varieties are fairly UV-resistant (more so because of the double-layered construction). I inquired about the price of new full-sized (4’x8′) sheets, but was taken aback by the price at $14 per sheet.

Today I made it home with about 70 quarter-sheets (2’x4′) of coroplast for free.  And they’re going to call me back (or possibly deliver) when they have more signs to get rid of!

That should be enough to keep me busy this winter making a new pastured poultry pen v2.0.

After visiting the Sullivan’s farm this summer I think I’ll try one with cattle panels and one with EMT conduit and see which one I like better.