If you happen to remember all the way back at the beginning of this summer we installed 3 tire-tanks for the cattle. They’re still working great, but there is one problem that we discovered. Turns out these tanks are pretty good at growing a nice thick mat of algae on top of the water. The black tire must let it all heat up to a point that the algae love, cause it grows worse in the tire-tanks than in a normal galvanized stock tank. 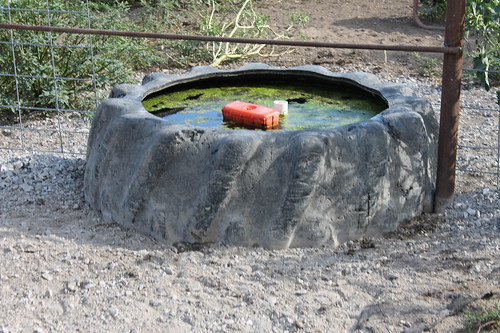 Fortunately, there is a pretty simple cheap solution to the whole algae thing.
Goldfish.
A few of these per tire and we ought to be alright. And at 38 cents each, they’re not going to put a dent in the bottom line. Here’s a big fella that’s been in there for a month or so. 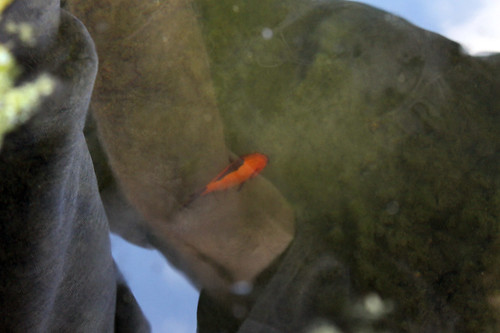 There were 4 in this tank at first, but we could only find two in there today. We were wondering why they hadn’t put a bigger dent in the algae yet, so that’s a bit of an explanation. Still no explanation as to what happened to the other two fish. Oh well, $0.76 down the drain.

The plan was to release them into the tank in the barn lot, and then move them to the other tanks in the back as time allowed. This plan, however, requires catching the little buggers. Easier planned than done. Fast little fish in a great big tank and a tiny goldfish net; good luck with that one. 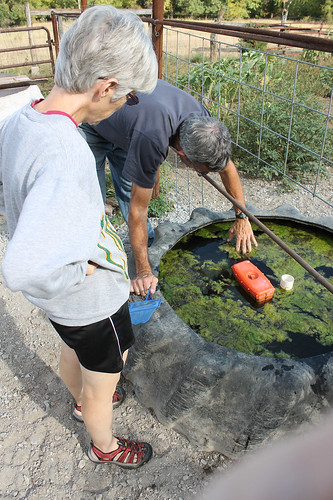 More goldfish are in order.

Oh, and in other news, we got rain today! A whole 3/16″ of the stuff! A pathetic amount, but rain nonetheless. We’ll take what we can get considering that we’ve been upgraded (downgraded?) once again to Exceptional drought, the most extreme drought classification there is. We’d better get used to it, because the USDA’s forecast has the drought persisting through at least the end of November! 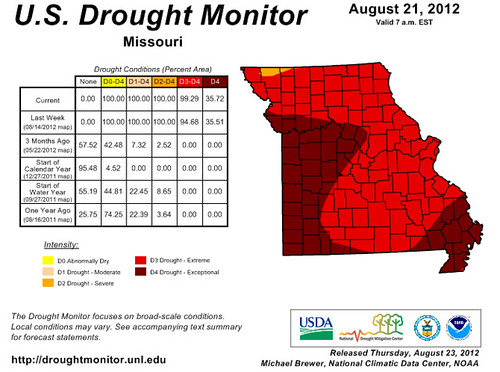