A week or so ago we got 6″ of snow.  Then after a few days of 40+ degree weather the bulk of it melted away.  So now that most of the tall grass and weeds have been knocked down, it was time to get out in the field and gather up some of the electric fencing stuff that’s been out in the field for quite a while.

Here’s the haul from a few hours work: 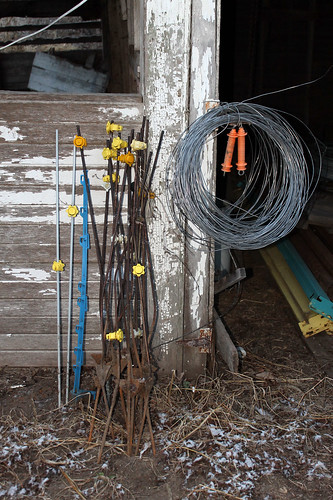 Most of the fence posts are the steel temporary posts, but there are a few newer fiberglass and plastic step-in posts. I got most of them out earlier, but I’m still finding a few in some out of the way places.

The real kicker was the wire.  There is a real hodge-podge of electric fence wire on this place.  The vast majority is single strand 14ga galvanized or even rusty un-galvanized wire (also about 14ga).  There is a bit of 12.5ga hi-tensile wire in places, but I wasn’t really expecting to find this much 12ga aluminum wire.

I knew that aluminum wire was expensive, so I unhooked it from either end and pulled it all out.  Most of the electric wire is along old beaten-down fencelines and most is on the ground, often under a lot of grass and weeds. It’s a bit of a pain to pull it all out, but for the aluminum wire, it might be worth it, the darn stuff is $50 for 1/4 mile.  Aluminum is quite a bit more conductive than steel wire, but it does break easy.

I was thinking of using it in a training pen, where it’s not really neccessary to keep animals in, and will make sure they really get a good solid shock to train them to respect the electric fence.  It may work out if I have enough of it, but I’m worried about an amped-up critter breaking it.  High-tensile wire is really difficult for an animal to break, but this aluminum stuff broke once just from me pulling it all off of the ground.  Maybe I should just use it around the chicken coop to keep predators away.  I think chickens are probably too small to do much damage to the wire.

Has anybody used aluminum fence wire before?  How did you like it?