Well, I’ve heard rumors of some silly new FDA regulations coming down the pipeline, and a few days ago, the new rules arrived.

Draft Guidance for Industry: Questions and Answers Regarding the Final Rule, Prevention of Salmonella Enteritidis in Shell Eggs During Production, Storage, and Transportation (Layers with Outdoor Access)

Sounds innocuous enough.  Wordy, yes, but this is the Federal government we’re talking about…

Anyway, this is part of an ongoing process by which the FDA “clarifies” the rules that it’s already made for us farmers to follow.  These particular rules were put in place almost 5 years ago, but they’re still deciding exactly what the rules mean. 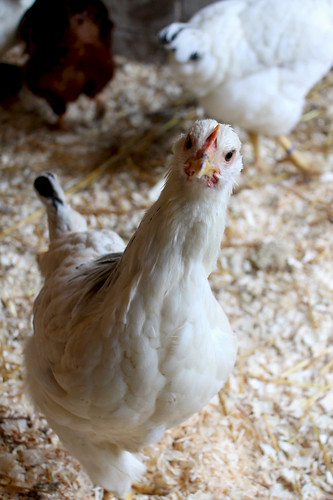 These rules are supposed to prevent Salmonella Enteritis from infecting eggs that we farmers sell.  Nevermind that a SE-infected hen only “sheds” SE into 1 of every 20,000 eggs she lays.  Nevermind that you’re far more likely to contract a Salmonella infection from a head of lettuce than from an egg.

So, logically, it’s time to lower the boom on egg producers.

So what do these new proposed rules do?

They require us farmers to keep our “clean” chickens away from any “dirty” wild animals that may carry Salmonella.

You must prevent stray poultry, wild birds, cats, and other animals from entering poultry houses (21 CFR 118.4(b)(4)).  This requirement applies to the entire poultry house, including any outdoor access areas that are part of the poultry house.

So if you’re a big industrial egg producer this is no big deal.  You already have your chickens locked up in a windowless building, you’re chickens will go to their graves without ever having seen the sky, breathed fresh air, or come into contact with a stray sparrow that might sneeze on them.

It’s only those weird organic producers, or those crazy “free-range” pastured-egg producers that have anything to worry about.  Our chickens get to roam around outdoors, pecking in the grass, scratching in the dirt.  According to the FDA our chickens live dangerously because they roam around in the “unsanitary” outdoors instead of a “clean” battery cage inside of a giant poultry barn.

These rules, if they become law, will mean the end of free-range eggs.  Our chickens will have to be locked up in a completely fenced (and roofed) enclosure to comply, and we’re not interested in raising confined chickens.

Confined chickens are bad for the environment, they lay less-healthy and less-tasty eggs.

These rules are bad for farmers, bad for chickens and bad for consumers.

If you like our free-range eggs, and want to be able to continue buying them, please let the FDA know as much by September 23rd so that these proposed rules don’t become the law of the land.