Ever since we got rid of one of our Large Black sows, I’ve been keeping tabs on a few young ladies from our last litters as a potential replacement. 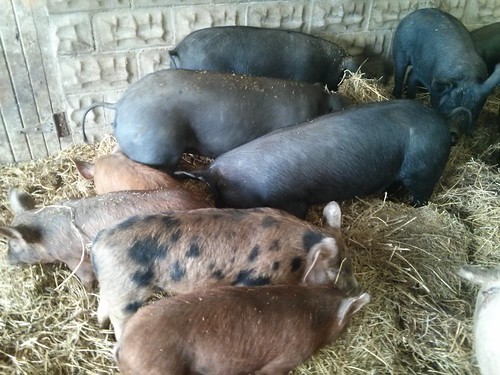 In the early running I was leaning toward a daughter of our Gloucester Old Spots sow Annette. Annette was, far and away, my best farrower of the bunch. Since farrowing (giving birth) successfully is a huge part of a sow’s job, she earned high marks. The problem came after farrowing. Annette is the only sow who never really liked getting a bellyrub. That may not seem like a big deal, but it seems that a bellyrub is a pretty good indicator of how a sow will nurse her litter of piglets. Our other sows will flop over at the first scratch, with Margo even “asking” for a bellyrub by flopping down at your feet before you’ve even touched her.
But not Annette. Annette has yet to roll over for a bellyrub. It seems like little coincidence then that Annette was frequently followed around by a gaggle of very noisy piglets all squealing to be nursed. While the other sows would quickly lay down to nurse their piglets, Annette would take a good 5 minutes to nurse her litter, sometimes walking a good distance before being convinced to lay down.

As a result, Annette’s piglets have been the slowest growers of the bunch. In the photo above, the smallest red pig is one of Annette’s, the other spotted/red pigs are Dottie’s (a week older), and the black pigs are from the Large Black sisters Margo and Trixie (a month older).
All the piglets were sired by our Tamworth boar, Harry.

There are a lot of variables going on in there, but all-in-all I’m happiest with Dottie’s litter. Still, I get the feeling that I can do better. Maybe a Tamworth sow is in our future?