So as I discussed earlier, we’ve run into a bit of a problem with our chicken feed.  It’s chock full of nasty stuff that I don’t want to feed to the chickens, and it’s going to take some planning to get this particular problem solved.

First, what I’ve been using is the “Duck and Goose Starter” from the local feed store.  This stuff is 20% Protein, no antibiotics, but full of animal protein meal.  Yuck.  It’s only positives are that it’s available locally (2 miles from home) and it’s relatively cheap at $15.47 per 50lb bag.

I just got back from Rochester tonight with two bags of Purina Flock Raiser (20% protein, no antibiotics, no animal by-products) for $17.99/50lb bag.  That price is gonna hurt if I have to keep this up, not to mention the 40 mile round-trip drive to get the feed…

Out of curiosity I asked them what the price was for the 16% Organic Layer Pellets they had in stock and let me tell you: that’ll put high feed costs into perspective for you.  $28.99 per 50lb bag!!!

Anyway, I’ve been mulling over the option of mixing up my own non-GMO feed for the chickens.  I’m sure that finding the base ingredients won’t be a problem.  And because our chickens are outside on pasture for most of their lives, getting the critical amino-acid Methionline won’t be a problem. Mixing the feed is a small problem, but nothing a few buckets and feed scoops can’t handle.

So what is the problem?

Grinding up the feed so the chickens (especially the smaller chicks) can more easily ingest and digest it.

There are plenty of grinders out there, but most of them are this type: the huge PTO-driven mixer-grinders for large-scale operations. 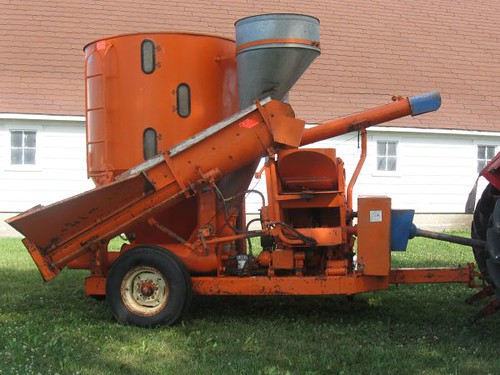 At a cost of $3000 on up (not including the tractor to power them) this is not a viable option for our farm.

Next up we have the antiques, like this Hit-and-Miss Grist Mill.

It’s old, hard to find and supremely dangerous by today’s standards, but it looks like it’d get the job done.

There are even some similar mills on ebay that look like they’d be easy to power with a v-belt and electric motor, negating the need for the old Hit-and-Miss engine. 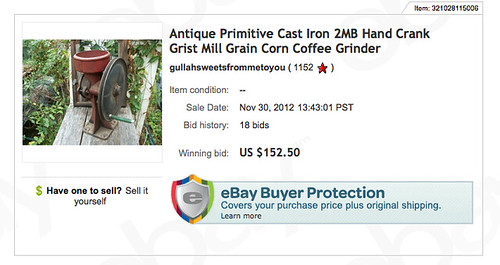 But at over $150 plus shipping (which will be very pricey for such a big hunk of cast iron) it’s best to keep looking.

Finally we move on to my old wheelhouse: home brewing grain-mills. You see, in order to effectively brew beer, one needs to crush up all that barley (and/or wheat) to extract all the sugars within.  Being crafty cheapskates, homebrewers are masters at getting all that grain crushed in a hurry for a minimal outlay of dollars.

Most intriguing is the homebuilt Roller-Mill

It looks pretty effective, and with a little scaling up it could probably handle the volume of grain that I’d need.  It’s just a matter of getting the time and energy to build one from scratch. With all the other work that needs to be done around here, I’d better keep looking.

This leads me to my likely solution (at least for the time being): The Corona Mill. I had one of these before, so it’s a known quantity.  These mills are not pretty.  They’re some of the ugliest hunks of cast-iron that you’re likely to see on a store shelf, but they do work, especially if you’re just roughly grinding grain. Don’t try one of these for grinding flour unless you really want to set yourself up to be disappointed.

At $25-$30 I think I’m going to have to pick one of these up pretty soon. They take a fair bit of modification to get into usable shape, but there’s plenty of info out there on modifying corona mills.

And not to mention this sweet mod that really appeals to the tree-hugging-bicycle-enthusiast in me: the Mayapedal.

Now to track down all the grains that I’ll need…