I wanted to believe that Joel Salatin’s chicken-raising method would work for us.  We started out with some pens we slapped together from recycled material and dutifully used them for a few years.  After that, the pens flaws were showing.  I redesigned the pens earlier this year, hoping that I could mitigate the problems, but it’s now clear to me that Joel’s system is not going to work for us. 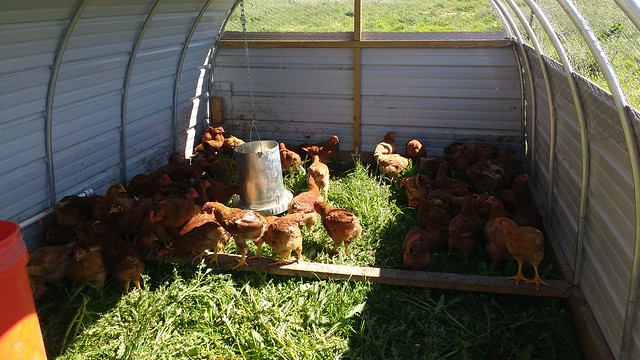 Here’s the thing, I don’t think it’s a bad system.  Joel’s system works really well for raising Cornish-Cross broilers in a environment were:

A: you don’t experience very windy conditions during the growing season.

B: all other livestock will be excluded from the chicken’s pasture.

The problem is that we always have windy weather in the summer and fall, we have other livestock that need to move through the chicken’s pasture occasionally and we won’t be raising Cornish-Cross chickens.

Joel Salatin’s system is really in it’s element when you can build cheap light-weight pens that can be easily pulled around the pasture by hand.  You can only keep around 50 chickens per pen, so you’ll need lots of them to make the eventual trip to the poultry processor worthwhile.

In order to sell chicken at a farmers market we need to have our chickens butchered at a USDA-inspected poultry processor.  Such processors are quite rare, and we count ourselves as lucky to be only a 90-minute drive from our poultry processor. Even so, to make the trip worthwhile we need to have a full trailer.  This means that we’d like to have batches of at least 300 chickens.

Our first pens were really efficient, their light weight meant we spent less time and energy moving pens around the pasture.  Unfortunately, realities of weather and other livestock meant that the lightweight pens did not last very long.  Late summer and fall are a reliably windy time on our farm, leading to scenes reminiscent of a poultry-based Wizard of Oz.  Poultry pens would be blown around and inevitably end up smooshing chickens like a Kansas farmhouse, if Dorothy’s house was then flattened by a herd of cows eager to scratch their necks on the Auntie Em’s clapboard siding. 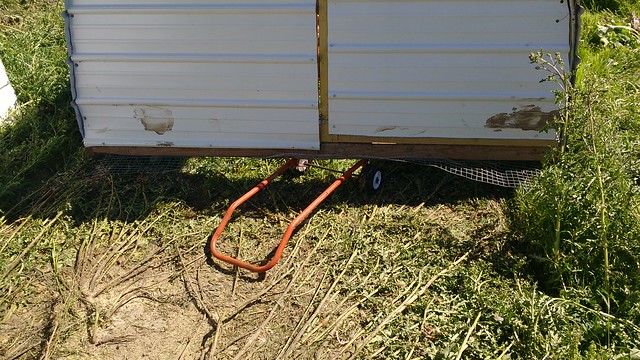 Our solution to this little problem was to design a much sturdier chicken pen, but while the new pens solved a few problems, they created a few more.  The new pens are much sturdier, showing nary a single sign of wear, but all that sturdiness manifests itself as extra weight.  Extra weight makes the new pens much harder to move, even with a Salatin-style dolley to add wheels to the process.  To make matters worse, we found out that the new pens still get blown around on gusty days.

One of the biggest expenses in raising broilers on pasture is labor and when your chicken pens require even more labor than usual, the economics begin to work against you real fast.  So while our new pens cut out a lot of work rebuilding and refitting pens at the beginning of every season, they cause us a lot more work in their day-to-day operation.

To top it all off, last year we decided that we didn’t much like raising the standard Cornish-Cross breed of broiler chicken and we opted to only raise the slower-growing Red Ranger breed.  It turns out that we’re not the only ones deciding to make the switch, as Starbucks and Whole Foods just announced that they’d soon switch to similar breeds of chickens.

One thing we really like about the Red Rangers is that they exhibit ranging behaviors that are much more like a laying-breed than the Cornish-Cross.  Where Cornish-Cross are the couch potatoes of the poultry world, Red Rangers are jocks by comparison.  Red Rangers, shockingly enough, range very well.  While they still grow a lot faster than a layer, they retain the athleticism that’s necessary to get out and hustle up some grub on pasture.  As such, they don’t really require the same pasture force-feeding regimen that Salatin’s open-bottom pens are designed for.  Red Rangers are more than happy to go out and get some of that pastured goodness for themselves, thank you very much.

So this year, we raised our first batch of broilers using the new pens, but we let the chickens day range.  This means that we penned the chickens up at night, but opened the doors to let them free-range during the day.  Our day-range experiment worked out swimmingly and we’re planning to move to a day-range system for all of next years broilers.  Day-ranging, even with our less than ideal new pens, saved a good deal of labor.  Because the chickens were only penned up overnight, the pens could be left in place for 2-3 days before one needed to go through the maddeningly difficult task of moving them to a new patch of grass.

In short, it all worked out OK, but we’re giving up on the second batch of broilers this year.  I’ve got an idea for a new system for raising broilers, but it’s going to have to wait until next year.