Earlier this week I bought the first three pigs for our new farm.  They weren’t exactly the heritage breed hogs that I’d like to end up with, but they’re a cheap entry-point to the pork business, like a set of swine-raising training wheels.

Unfortunately, when buying feeder pigs, you’re at the mercy of the local feeder-pig producers.  In my case I got three pigs from a guy who raised pigs fairly conventionally.  These pigs came from a farm where they were raised in a barn, not a huge heated confinement barn, but indoors nonetheless.

On the ride home we noticed that the pigs all had very raspy-sounding breathing and they stunk like they had been cooped up indoors with a lot of other pigs.  Figuring that they’d been raised indoors breathing a lot of stale ammonia-leaden air, we figured they’d improve with all the fresh air that they would now be living in.

All three pigs were a bit lethargic on their first day on our farm. I figured that it was to be expected from the stress of being moved to a new place.

By the second day, two of the pigs were active and eating, but the third ways still lethargic, not interested in food and most worrying: shivering.  In an adult animal, being sick is not something that usually requires much intervention.  Adults tend to have robust fully-developed immune systems to fight off most illnesses.  It’s the young ones that you have to watch out for.  I know firsthand that young calves and chicks can keel over dead within hours of showing signs of being sick.  Much like human babies, they have undeveloped immune systems that can be rapidly overwhelmed by an infection.

Knowing how fragile young animals can be when dealing with an infection, it was time to act.  The sick pig got an injection of 2.5cc’s LA-200 (oxytetracycline) 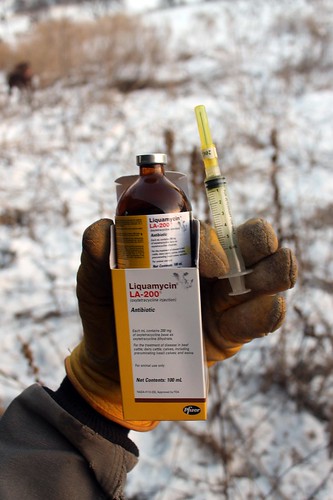 While I have written before about the dangers of routine antibiotic use, antibiotics definitely have their place. Antibiotics should be used, much like in people, in targeted applications to treat sick animals that would otherwise die or be permanently harmed. When used sparingly (and according to the directions) antibiotics will be long gone from the animals system by the time they become food. Most antibiotics are excreted from the body in the urine within 24 hours application.

(As an interesting and disgusting side-note: the first patients to receive penicillin were given multiple doses by “recycling” the penicillin that they excreted in their urine.) 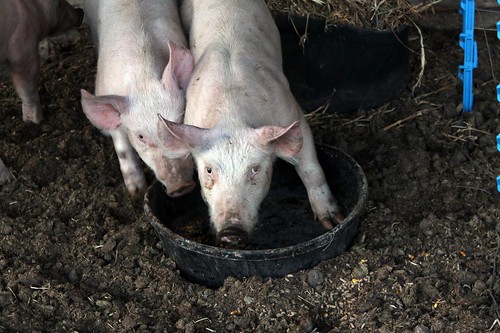 An hour later the sick piggie was still shivering a little bit, but he was standing in the feed pan scarfing down food.  By the next morning he was looking like a million bucks.  Antibiotics sure can be miracle drugs when they’re needed.

Just to make our marketing a bit easier, we will be the ones eating the pig that got the injection.  The antibiotics will be out of it’s system in a few days.  In 5 months when it’s time for the pig to be slaughtered the antibiotics will be long gone and forgotten, but we still couldn’t honestly claim that it was raised without antibiotics. It’s a shame that the big animal confinement operations have so sullied the name of antibiotics.  They’re darn useful and safe when handled responsibly (not in every animals feed their entire life.) But it’d honestly take more time to explain it to our customers than it’s worth, so this piggie is not going to be for sale.  Since we were going to keep one pig for ourselves anyway, we’ll be keeping this particular pig for our own freezer.

I think I’ll name him Bacon.